Because You Watched Narcos | Maria Samper

“The conflagration that would destroy the imperial and patriarchal archive can only be performed precisely through a revisitation and rehabitation of the very structures to be destroyed.” – Trevor Hope in “Revisiting the Imperial Archive

Since my first year at university, I’ve been partaking in a kind of independent study centered around the archive and its imperial functions. Scholar Trevor Hope writes about how archives that seem to sustain a unified national identity actually function in a way that reveals the false illusion behind that unity. For Hope, archives are as fragile as the spectacle they are called upon to purport and protect.

Derrida defines archives not only as a material space but also as any organized amalgamation of signs. In thinking with Derrida and Hope, Netflix is an archive that organizes the spectacular signs of American imperialism. Take the Netflix TV show Narcos (2015): Narcos manipulates and reduces a history of Colombian suffering into a fictional story told and propelled through a narrow American perspective. It pains me to see how the story is sensationalized by US media and how it is received sans critique by Western audiences.

I understand why it may be difficult for a Western audience to empathize with the confusion and pain I feel about the portrayal of that period of Colombian history, especially the representation of Pablo Escobar as a cool anti-hero: he is surrounded by women, lives in an extravagant mansion, speaks coolly to government authorities – all while being a seemingly devoted family man. I’m reminded of a video on YouTube called “Top 10 Badass Pablo Escobar Moments from Narcos.” My project aims to bridge this gap, a gap that guides people to create content such as this. To bridge this gap is uncomfortable and disorienting, I felt this myself in creating the website. I grew up in Western North American countries and am certainly immersed within the spectacle of American imperialism. It is when the American spectacle uses a foreign story I am so acutely familiar with that I see the mechanisms within which it operates.

In my project, I create fake Netflix titles about Western tragedies that reflect some of the self-serving narrative mechanisms Narcos imposes upon painful moments in Colombian history. Then, I deconstruct the platform into the discordant signs and codes it is composed of. The archive of Netflix is just as fragile as the spectacle of the United States. It is destined to self-destruct, but today it reigns supreme. What happens if I try to destroy it prematurely? 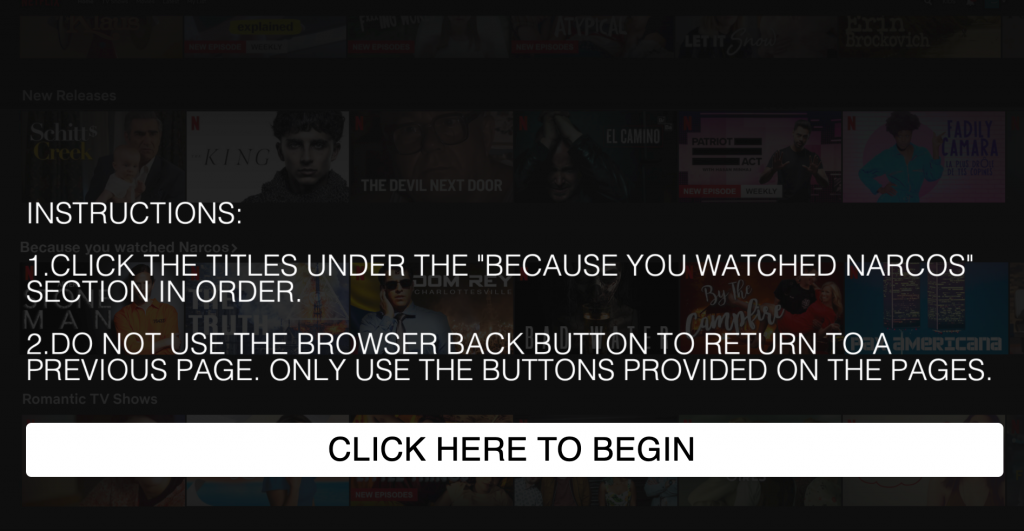