“Whereas narrative once was the art of time, now time is being organized technologically,” Wolfgang Ernst writes.

The notion of counting, mathematics, and time is essential in several media archaeology approaches. Friedrich Kittler points out how observing time in frequency notations made the phonograph possible, Ernst discusses the Eigenzeit of media systems, and Garnet Hertz and Jussi Parikka note the repurposing of “zombie” media—obsolescent media with the potential to be ‘resurrected’—to complicate the temporalities of technologies, nature, and history. These scholars approach media archeology outside of a historically linear and narrative model. I would like to apply this approach to the media object of a music box.  Though the music box is, on the surface, considered a novelty gimmick or children’s toy, its development can be traced in relation to revolutionary inventions like the mechanical clock and the steam engine. While the music box became obsolete much faster than the other two, its trajectory illustrates the difficulties of a multimedia archive.  In this paper, I will operate a ‘broken’ music box to explore the relationship between timekeeping, the music box, and the insights that malfunctioning objects can offer.

The music box developed in three distinct stages. The idea of an automatic music machine came from bell towers in Europe, where a rotating barrel would move hammers to strike tuned bells in rhythm to produce music. In the 18th century, watchmakers miniaturized the units, shrinking the bells and hammers to fit in a watch or box (Pfirrmann). The speed at which the bells were struck was regulated by a control mechanism called a governor. This evolved into cylinder-style music boxes, where pins on a rotating metal cylinder regulated by the governor hit the teeth of a metal comb. By the 1880s, small musical movements (the cylinder system) could be incorporated into many objects with different functions, such as jewelry boxes, pocket watches, or snuff boxes. However, many still favored the music box as simply a device to play music, and in 1885, the first disk music box was introduced to the public. Shortly afterwards, the music box quickly became obsolete with the rise of the phonograph and player piano in the late 1890s. 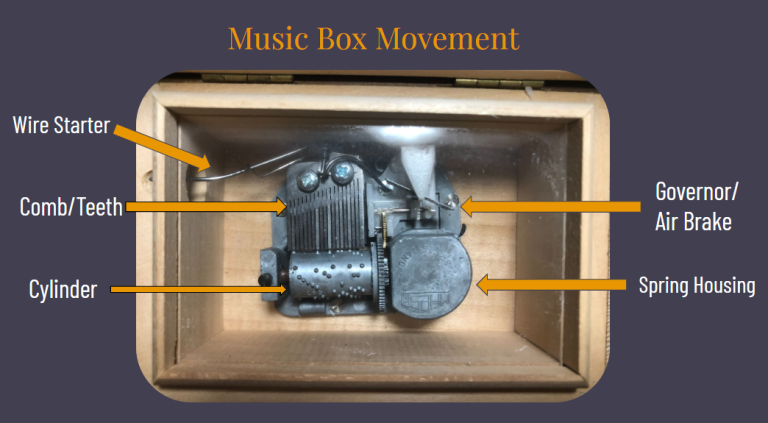 For this essay, I borrowed a cylinder music box from my friend. Although I used to own a jewelry music box, it was donated along with the rest of my childhood toys when I turned 14. The music box that my friend lent to me plays “Edelweiss” from the musical The Sound of Music. However, the governor fails to function properly– the song plays at a snail’s pace. This observation relates to Ernst’s notion of Eigenzeit, which suggests that machines have their own sense of time (57). No matter what the referenced tune programmed on the cylinder is supposed to sound like, the music box operates on its own temporal horizon, regulated only by the governor.

Rather than interpreting the “musical content as cultural meaning” to generate discourse (68), Ernst would find the relevant media-archaeological investigation in the noise of the mechanical music machine: the crackle of the wind-up, the hum of the governor, and the abrupt silence when the box lid is closed. But with this lethargic cylinder rotation, even knowing the intended message, the strike of each tooth feels more like individual notes than a cohesive melody. In this case, a complete transition in content from “message” to “noise” can be dictated by the music box’s sense of time, which in turn is dictated by the governor (Ernst 69).

The development of the governor is closely associated with innovations in the field of timekeeping. Before the invention of mechanical clocks, time was imprecisely estimated by sun, sand, or water clocks (Riis 149). Control mechanisms using escapements and oscillating processes were developed over centuries to regulate an accurate clock rate, such as a pendulum swing. This system inspired James Watt in 1788 to modify the mechanism into what is now known as a centrifugal governor to control the speed of his steam engine (147). As such, it has been stated that “the clock, not the steam engine, is the key-machine of the modern industrial age” (Mumford 14). Eric Kluitenberg takes the abstraction a step further by describing the mechanical clock as a symbol of inhuman oppression under the conditions of large-scale industrialization (50). The mechanical clock is not merely a clock; rather, it is a technological testimony to the rigid structure of a systematic disciplinary society. His use of the clock as an allegorical device demonstrates the deeper significations and authorities that media have on our ingrained expectations.

Returning to the media object in question, can it be said that this music box is not necessarily ‘broken’ or depunctualized? The tune is still being played with proper pitch and proportions of time—only the ratios have shifted. The governor still consistently spins, the cylinder rotates smoothly, and the movement “reads” the sound traces correctly. However, in his book Machine Music: A Media Archaeological Excavation, Riis believes that “it is the speed regulation… that is the key mechanical principle in ensuring equal regulation of the machine’s functionality” (157). Because Swiss watchmakers bound the governor in the music box to the design of the mechanical clock, the music box carries the expectation of controlled and accurate timing. Once it ceases to function as expected, the idea of the music box as a consistent automated instrument loses its authority, and in turn, questions the concept of using technology to exact perfectly ordered time (Riis 159).

What does the malfunctioning music box offer us, then? The glacial pace of the melody infuriates my friend; the music box has now been generously gifted to me. Although Riis considers the sluggish governor a malfunction, he examines malfunction in technology as artistic potential (142). In a post-humanist reading, the governor is not a malfunction at all—the music box simply resides on a different temporal horizon from us. A computer scientist named Danny Hillis set up a non-profit to design and install a giant mechanical clock that will “tick once a year, bong every century, and produce a small mechanical show every thousand years” (Kluitenberg 64). Just like this music box, all the components of the Clock of the Long Now function as intended, merely in a different scope of time. With this project, Hillis seeks to provoke questions about the acceleration of technology, obsolescence, and sustainability. The malfunctioning music box calls forth similar questions, and further asks us to consider the significance of niche repair services for obsolete media. 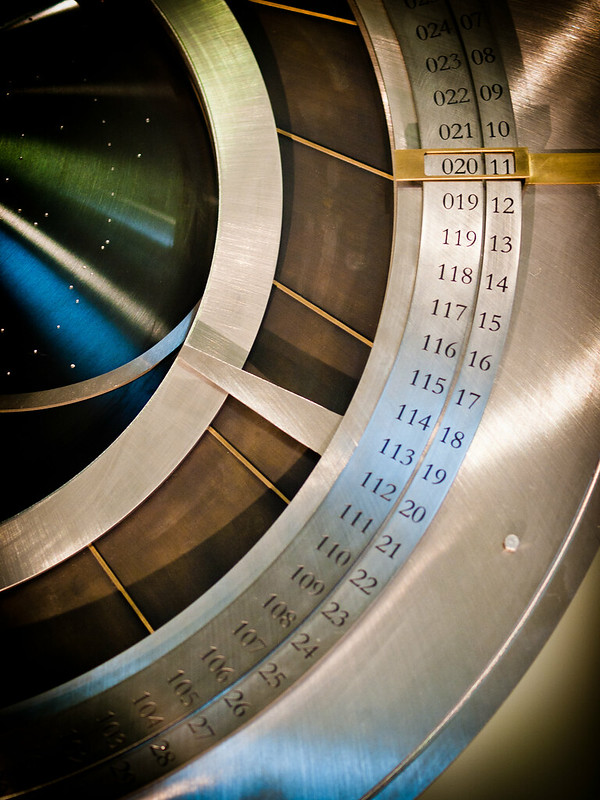 Some antique music boxes have the feature of swapping disks or cylinders for different tunes. Nowadays, these interchangeable disks/cylinders are not easy to find – they were often crafted unique to the box or maker. However, there are niche websites offering both the sale of these disks/cylinders and restoration of music boxes. This is not a coincidence – each disk/cylinder contains a message in a language that makes sense only to the machine. Without the music box, the archive of music programmed on the disks and cylinders is useless. This dilemma is examined in Wendy Hui Kyong Chun’s discussion of the multimedia archive, in reference to Kittler and Foucault (5). Kittler argued that Foucault limited his project on the archive because he did not consider multimedia and its documents. Discourse analysis cannot not be applied to documents that aren’t legible to the human eye—and with the obsolescence or degradation of analogue media, preservation and access of historical documents becomes an issue. In Gramophone, Film, and Typewriter, Kittler claims, “What remains of people is what media can store and communicate” (xl). What happens to our record of history when we no longer have the media to communicate what was stored? Is digitization the only answer for obsolete analog media documents? For now, we still have specialized repairmen – but perhaps one day, the crackling cue of a music box being wound will be heard only through a digital recording.

Hertz and Parikka write, in reference to Bruno Latour: “It’s often when things break down that a seemingly inert system opens up to reveal that objects contain more objects, and actually those numerous objects are composed of relations, histories, and contingencies” (149). Through the operation of a music box with a malfunctioning governor, we can observe its connections to earlier and later inventions that influenced time, industrialization, and new social orders. The logic of timekeeping through mechanical and technological methods begins to shift when seen through the perspective of the machine’s Eigenzeit. Finally, the ‘broken’ music box brings to mind the concerns of archiving documents which require the operation of obsolete media.As Hertz and Parikka write above, a broken object is valuable for the revelations behind its systems and histories, and this music box provokes further questions about keeping records of history with rapid technological change, degradation, and the multimedia archive. To further explore this topic, a project could be to take apart and ‘bend’ the malfunctioning music box. Manipulating and re-appropriating the mechanical components of this media object could be useful in examining questions of interface, artistry, and the complexity of technology development in media history. However, I don’t have the heart to take apart this music box—despite its sluggish pace, its capability as an archivist beats mine when it comes to reading music cylinders. There is still worth in this broken, near-obsolete media object yet, and perhaps more than ever going forward.

This academic essay is licensed under Creative Commons License CC-BY-NC 4.0.

Ernst, Wolfgang. “Media Archaeography: Method and Machine versus the History and Narrative of Media.” Digital Memory and the Archive, edited by Jussi Parikka, University of Minnesota Press, 2013.

Claire Lin is a rising fourth-year student in the UBC Media Studies program. She is interested in editing, book design, and the intricacies of multimedia communication.

< Back to Volume III